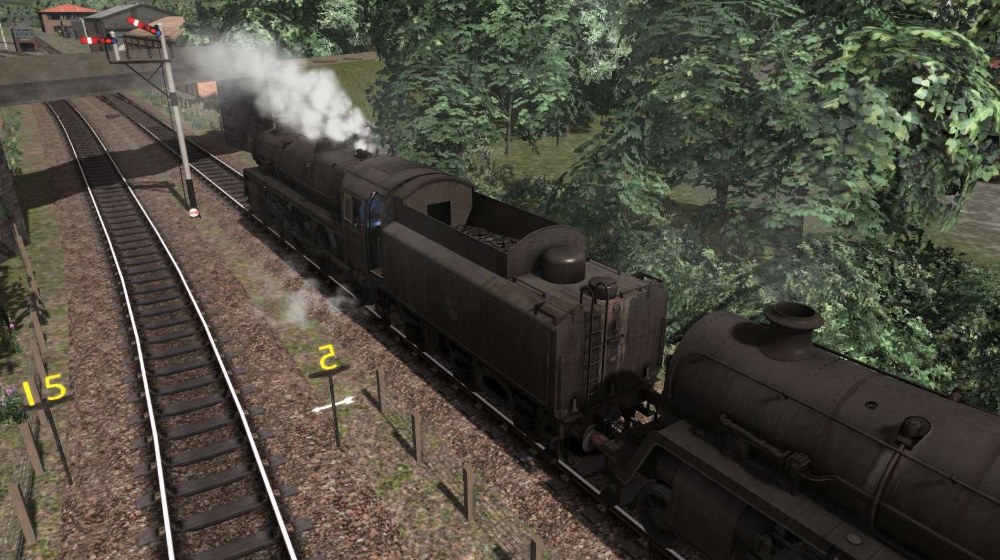 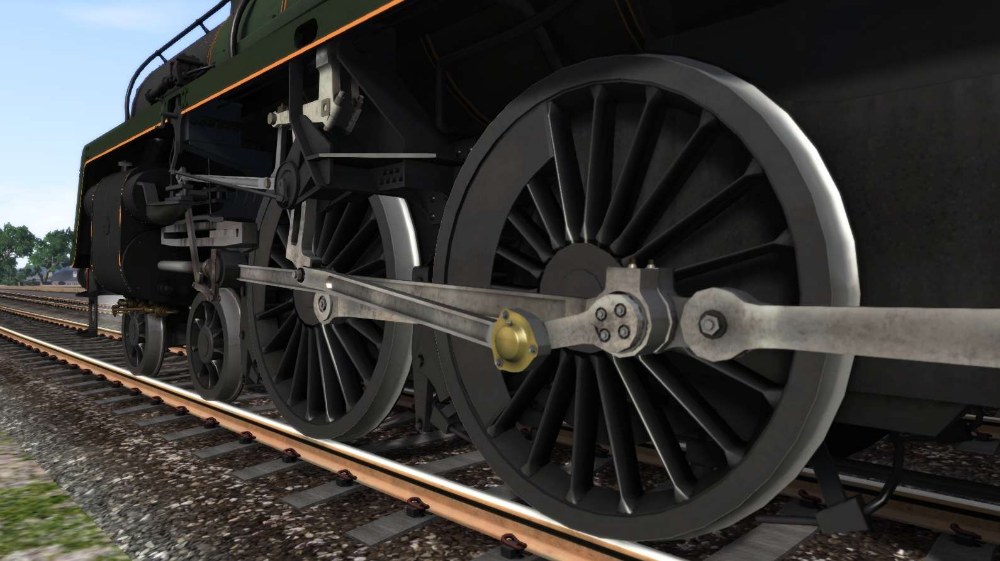 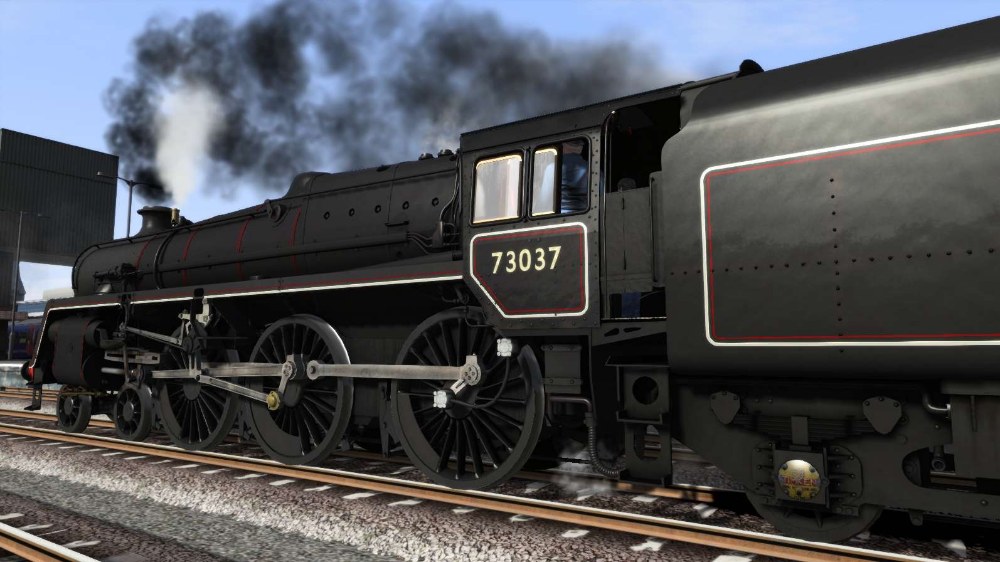 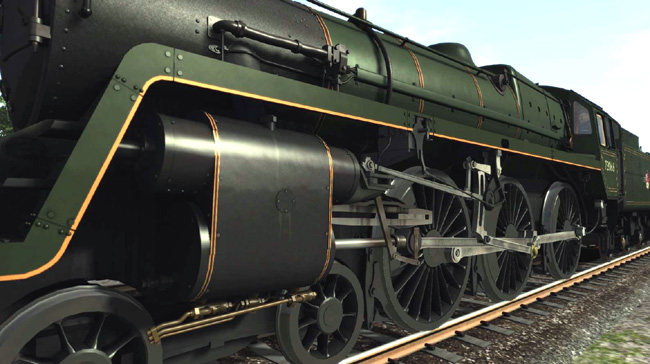 Also included are an ActivHints system to help you master these locomotives and an ActivFireman to take over firing duties if you need a helping hand!

Unique to the 5MT Advanced are two brand new features that will assist both novice and experienced drivers!

ActivHints - this will post messages to help you drive and fire the locomotive so that it runs efficiently. ActivHints can be toggled on/off.

ActivFireman - as a new driver of steam locomotives you may not be sure about how to control the firing and watering of the boiler. No problem! Switch on ActivFireman and he will take good care of all of that work while you drive!

Tenders - also included are BR1, BR1B, BR1C, BR1G and BR1H tender types, Black and green liveries in clean, intermediate and weathered conditions are included for each type of tender. The clean tenders are further split into early emblem and late crest versions, but the intermediate and weathered versions are late crest only. The locomotive cab automatically converts itself to the correct type depending on which tender is coupled behind it.

The Just Trains BR Standard 5MT Advanced is probably the most authentic and realistic steam locomotive available to date and comes with a unique Switcher utility to allow a Simple version to be driven and 13 exciting scenarios, (some requiring additional payware routes) with an approximate total duration time of around 22 hours! Three Free Roam scenarios are also included.

We have worked to replicate as far as possible the typical operations of a real steam locomotive. Fully replicating a realistic steam locomotive in Train Simulator is simply not possible, but we have added features which bring that dream closer to reality and give you a genuine feeling of what the real locomotive is like.

Unfortunately one of Train Simulator’s limitations is that you cannot start with a steam loco cold, i.e. without its fire lit, but with the 5MT Advanced you have the opportunity to join the loco at the ‘warm’ stage where it is nearly ready to drive but still requires several operations to be carried out to ensure that it runs efficiently, namely filling the sandboxes, cleaning out the dust and dirt from the smokebox, priming the oil system via the oil distributor pump, and blowing down the boiler to help remove impurities. These may not be a fully accurate set of operations with the engine warm, but they are the most authentic currently available to us.

Please note also that not all these routes are included in Train Simulator by default and are not supplied with this product. You can purchase them from the Just Trains website or from the STEAM store.

JT BR5MT – A Bunch of Fives
Duration: 65 minutes
Drive a pair of Standard 5MTs on The Pines Express from Bath to Templecombe.

JT BR5MT – Van Train
Duration: 70 minutes
Drive 73068 on a van train from Radstock to Templecombe, but first you must take your loco from Bath Green Park MPD to the yard at Radstock.

JT BR5MT – The Scotch Explorer Part 2
Duration 150 minutes
Drive 73096 in Part 2 of the Scotch Explorer from Edinburgh to Kings Cross as far as Newcastle. You will make a short stop at Crag Mill loop en-route.

JT BR5MT – The Scotch Explorer Part 3
Duration: 120 minutes
Drive 73096 on the last leg of its mammoth journey from Edinburgh to Kings Cross. You will take control at the exit from Peterborough Yard, where the train has taken water, and will then haul the train all the way to London Kings Cross, stopping en route at Stevenage.

JT BR5MT – Cornwall Bound Part 1
Duration: 80 minutes
Drive 73096 from Bristol to Exeter whilst working a railtour to Par in Cornwall. You will make stops at Yatton, Highbridge, Taunton and finally Exeter.

JT BR5MT – Cornwall Bound Part 2
Duration: 45 minutes
Drive 73096 on the second leg of its journey from Bristol to Par. You will be in control for the non-stop section to Newton Abbot, where a booked stop will be made.

JT BR5MT – Standard to Stranraer
Duration: 120 minutes
Drive a BR 5MT from Castle Douglas to Stranraer in heavy snow while hauling an essential mixed freight train. Will you make it over the mountains with your important but heavy load?

JT BR5MT – Standard to The Sea
Duration: 100 minutes
Drive 73096 from Woking to Portsmouth Harbour on a 'Cathedrals Express'. You will make stops at Haslemere and Havant en route.

JT BR5MT – Standard Photo Charter
Duration: 60 minutes
Drive 73096 on a photo charter on the Mid Hants Railway. You will perform a number of run pasts between Alresford and Medstead before returning to Alresford.

JT BR5MT – Glasgow Bound
Duration: 210 minutes
Drive a Standard Class 5MT pairing on the 16:15 Fort William-Kings Cross in the summer of 1961, it's a gorgeous summer's evening and you should run problem free throughout!


JT BR5MT – Morning Freight
Duration: 120 minutes
Drive a 5MT on an early morning freight during a freezing dawn in January 1960. Will you have the skills to get this heavy load over Rannoch Moor?

Click on a train and take it for a drive on these routes: